We’ve got some Conference passes to give away for TWIS readers to the upcoming London Cloud Computing Congress.

It’s taking place on the 15/16 March at Olympia and there are some fantastic speakers attending- a lot from the “real world” so it’ll be a good opportunity to gather real data from real users. I’m particularly excited about meeting Dion Hinchliffe- esteemed blogger.

The passes are worth £195.00 each but the conference also has a free workshop track– so if you don’t win one of the passes you can still attend part.

As always, priority will be given to those that can actually attend- so please make that clear on your entry- emailjp@justinpirie.com with the subject “CCCL Draw” to be entered.

Sometimes I think we need a re-boot, a reminder of why we’re in SaaS and reinforce to ourselves why we’re not. It’s too hard to be successful not to think this about it sometimes.

Marc Benioff’s post this week on Techcrunch was one such reminder.

I quit my job at Oracle in 1999 because I couldn’t stop thinking about a simple question: “Why isn’t all enterprise software like Amazon.com?” Why couldn’t applications be run from a simple website, without software or hardware to install, and pricy consultants to hire? Why couldn’t we just compute in the Internet, or the cloud, and get away from the data center and all its complexity. Simply put, I wanted to simplify the enterprise. It was a pretty straight-forward idea, but from the confines in which I sat, there wasn’t anything close to a straight-forward solution.

That vision led to the founding of salesforce.com. But the enterprise world wasn’t ready for Amazon.com, or eBay, or Yahoo, or any of the innovative services that were changing the way consumers bought, sold, or communicated.

That was eleven years ago and most of us don’t have the luxury of burning through $13m a year for five years until you can file an IPO. Even if we did, the world has changed- Marc continues:

But it’s no longer Amazon that frames the questions or gives us the answers.

In this decade, I’ve become obsessed with a new simple question: “Why isn’t all enterprise software like Facebook?” As we were focused on bringing enterprise computing into the modern age, Facebook redefined the values of consumer computing and helped ignite the social phenomenon. The compelling aspect of feeds, profiles, and groups, amplify the service’s stickiness. So does its functionality on a mobile device like an iphone—necessary to secure a service’s status as a “killer app.” Facebook is where I start my day to find out what my friends and family are doing. It’s where I go to see the important events in my social life. Everything I care about and need to know is pushed to me—and it requires no work on my part.

Yet often I see companies that are focusing on the obvious benefits of SaaS highlighted in TWIS#12. Marc is reinforcing the shift away from purely functional SaaS software to SaaS that relies on Network Effects and Ecosystems to succeed.

Without Network Effects, none of this vision could happen, so he’s basically saying network effects are what Salesforce are concentrating on to differentiate themselves and get ahead of the competition, since they’ve already got probably the best ecosystem in the world: Appexchange.

I was reading the results of the Mimecast cloud adoption survey and something struck me- 46% of people surveyed were not moving to the cloud because of security.

This is bonkers! Just because it’s behind your firewall does not make it secure.

Reuven sum’s it up really well:

To understand security, you must first understand the psychology of how [cloud] security itself is marketed and bought. It’s marketing based on fear, uncertainty and most certainly doubt (FUD). Fear that your data will be unwittingly exposed, uncertainty of who you can trust and doubt that there is any truly secure remote environments. At first glance these are all logical, rational concerns, hosting your data in someone else’s environment means that you are giving away partial control and oversight to some third party. This is a fact. So in the most basic sense if you want to micro-manage your data, you’ll never have a more secure environment than your own data center. Complete with bio-metric entry, gun toting guards and trust worthy employees. But I think we all know that “your own” data center also suffers from it’s own issues. Is that guard with the gun actually trust worthy? (Among others)

Recently it occurred to me that the problem with cloud security is a cogitative one. In a typical enterprise development environment security is mostly an after thought, if a thought at all. The general consensus is it’s behind our firewall, or our security team will look at it later, or it’s just not my job. For all practical purposes most programmers just don’t think about security. What’s interesting about cloud computing is all the FUD that’s been spread has had an interesting consequence, programmers are actually now thinking about security before they start to develop & deploy their cloud applications and cloud providers are going out of their way to provide increased security (Amazon’s VPC for example). This is a major shift, pro-active security planning is something that as far I can tell has never really happened before. Security is typically viewed as a sunk cost (sunk costs are retrospective past costs which have already been incurred and cannot be recovered). But the new reality is that cloud computing is in a lot of ways more secure simply because people are actually spending time looking at the potential problems beforehand. Some call it foresight, I call it completely and totally rational.

I guess the survey highlights the progress we need to make as an industry to prove to IT decision makers that SaaS is secure. Hard when the on-premises vendors have the power to spread so much FUD but great when high profile attacks are sustained by the likes of Google and serious breaches within corporate networks are discovered the time.

I also wonder how much SaaS they’ve got running in their organisation today without them knowing about it?

I was working on the “4 states of SaaS” last week for a client:

I saw a really cool SaaS login vendor this week- Onelogin. I’ve given them a test-drive and I was really impressed- it’s by far the best implemented and most affordable multi-vendor SaaS login manager I’ve seen, plus it does two factor authentication too. Definitely worth a look if you haven’t seen it already.

We haven’t talked about pricing for a few weeks and Sachin Rekhi wrote an excellent post on SaaS pricing segmentation:

One variant of capacity-limited freemium tiering that is particularly effective for products targeted at the SMB market is to scale pricing with customer success. What I mean by this is providing various premium tiers of your product that will become appropriate for your customer as they are more successful in their own business. Typically this means tying the tiers with capacity-limits that either directly reflect or proxy the customer’s growth in their own user base or revenue.  (Emphasis- Ed.)

What’s nice about this model is that it appropriately segments your potential customers into pricing buckets by ability and often willingness to pay. Businesses that are just getting started, pre-revenue, or early in finding productmarket fit can often leverage your product as part of the free tier or low priced tiers. This provides few barriers to adoption and get’s them quickly onto your product. And as their business scales, they’ll think twice about switching since they’ve already been successfully using your solution. On the other hand, larger businesses will pay against a higher tier appropriate for their level of success.

Genius! I actually don’t think this should be specifically tied to freemium, but where possible to all SaaS pricing- Scale price with Customer success. That aligns value much more closely to price and will reduce barriers to adoption and Customer Acquisition Cost (CAC).

Thinking about CAC- FreeAgent blogged about their updated referral program this week. They’re giving their Users 10% of  anything you refer to them, for life, as a commission- and you don’t have to be a reseller or anything special like that, just a user.

In fact what they’re saying is: you are special, because you’re a user and we’re going to reward you for that.

Once you’ve referred 10 people- you can then become an Evangelist and get 20%- rewarding loyal referrers.

It’s a really smart move because SaaS businesses that can acquire customers for less than one year’s revenue are fundable, scalable and eventually profitable. They’re giving away 10-20% when most companies have to give 30-50% to the channel- their competitor Kashflow is giving an estimated 65%. Not only that, FreeAgent are rewarding their customers for their loyalty and recommendations.

I bet this helps customer satisfaction and retention too.

Thinking about retention- I seem to be having loads of conversations about the “megavendors” these last few weeks- maybe because of all the SAP stuff happening. Anyway- I thought this slide was an interesting take on where the megavendors strategy is going: 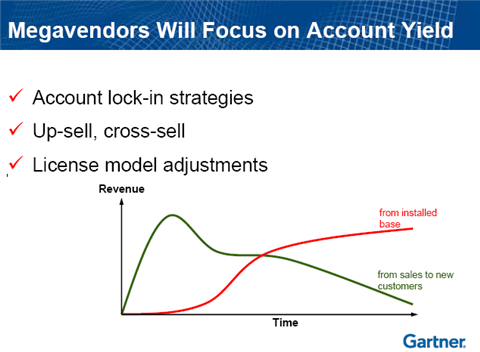 from: How Oracle gets customers to keep paying

I suspect they’ll continue to spew out FUD against SaaS until the time comes when they can sell SaaS without cannibalising their existing businesses i.e. they struggle to land new business but have fantastic maintenance revenue. Then they can acquire SaaS vendors for mostly shares, swap maintenance revenue out slowly for SaaS revenue, and viola, they’re back in the game.

It’s incredibly important for SaaS because M&A is the single most likely exit in the current environment. 3Tera, a cloud platform provider got their payday today by being bought by CA.

But more importantly than that, the megavendors can’t expect to charge maintenance forever- especially as most organisations can’t upgrade thanks to their “customisations”, that they typically paid 2x the software to implement… 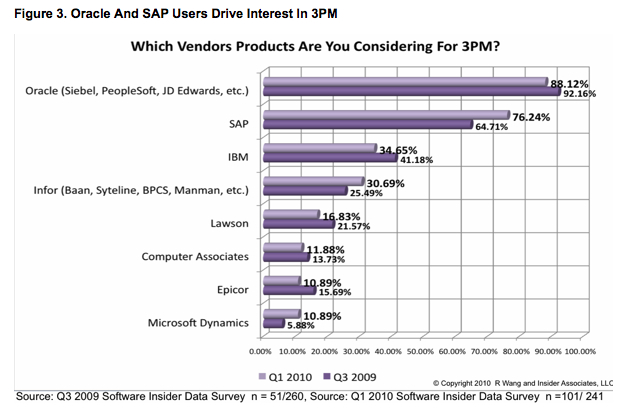 It can’t go on forever…

Have a great weekend.